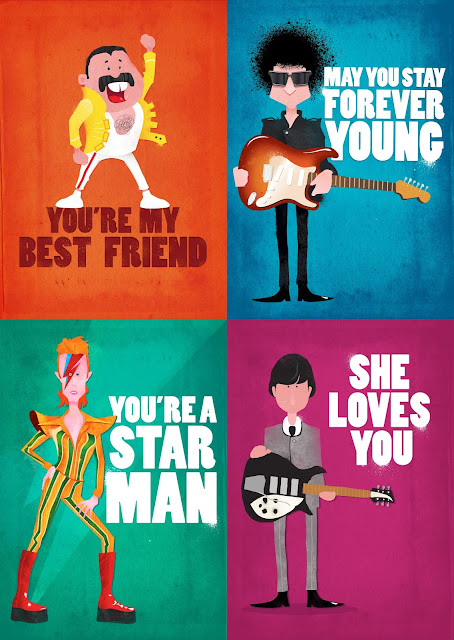 Part of a series of greeting cards entitled Centre Stage which I produced in conjunction with The Art Group. These were based on well known music icons, and were designed to have a hand made/craft quality to them.

I was asked to expand the range to encompass other fields other than music. this took the range to 12 designs.

As with all images posted here, please click the image for a larger view. 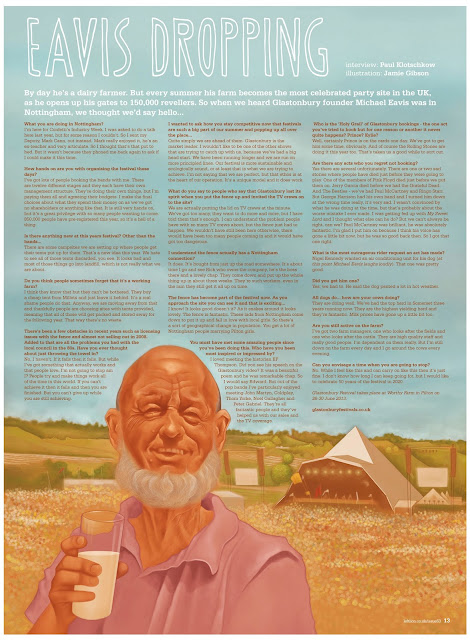 I was asked by Left Lion to produce an editorial illustration to accompany an interview with Micheal Eavis, the founder & organiser of Glastonbury Festival. The deadline for this was incredibly tight but I really enjoyed the back and forth with the editorial department & deciding which way it should go. The final piece is nothing like what was originally planned but the team & myself were a lot happier with the way this turned out.

Learning Together Part of another series of greeting cards based on children's books of the 70's.
I should add that these were produced before the recent revival of the Ladybird adult books. 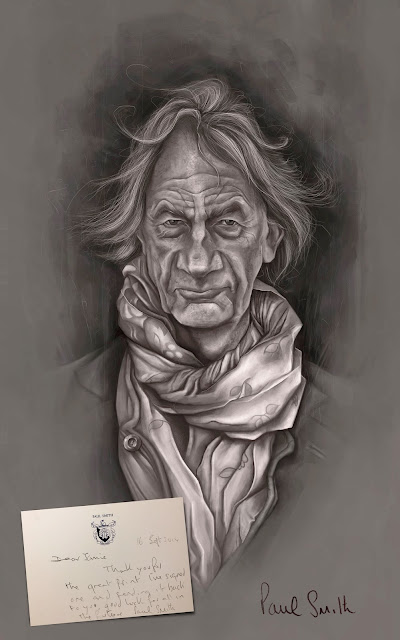 This is my portrait of Sir Paul Smith which I was lucky enough to get to the man him self. Really pleased he liked it. 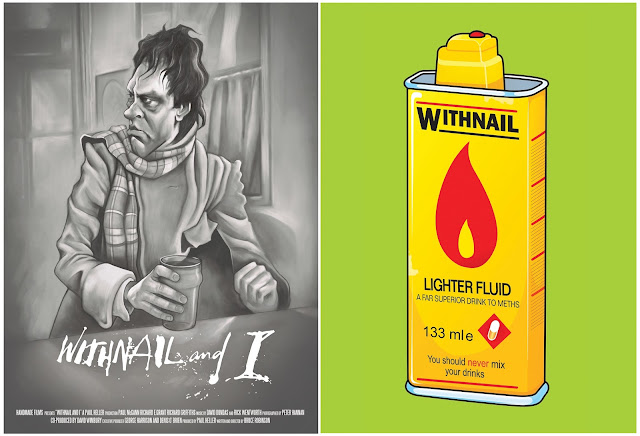 Withnail & I is (in my opinion) one of the best films ever made so I was thrilled when I was asked to produce some artwork to accompany the 30th Anniversary of this phenomenal piece of work, this was to be topped off by being able to present my work the the writer Bruce Robinson & Richard E Grant at the Electric Cinema in Birmingham.
Posted by JR Gibson at 04:14 No comments: 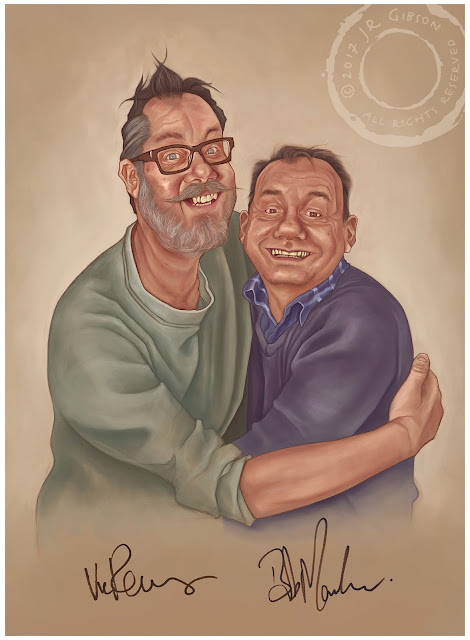 Here's a double portrait I produced to honour the 25th Anniversary of Reeves & Mortimer. I tend to be inspired to paint people I admire or respect and this is no different, I remember being knocked sideways when these two first aired on channel 4, I had seen nothing like it.
They were & remain the kings of comedy & lords of the daft. 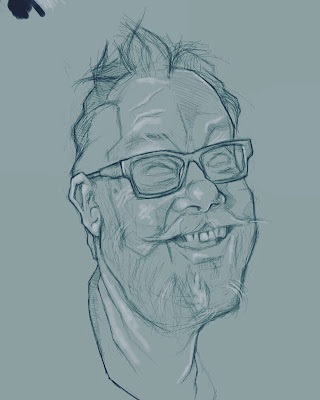 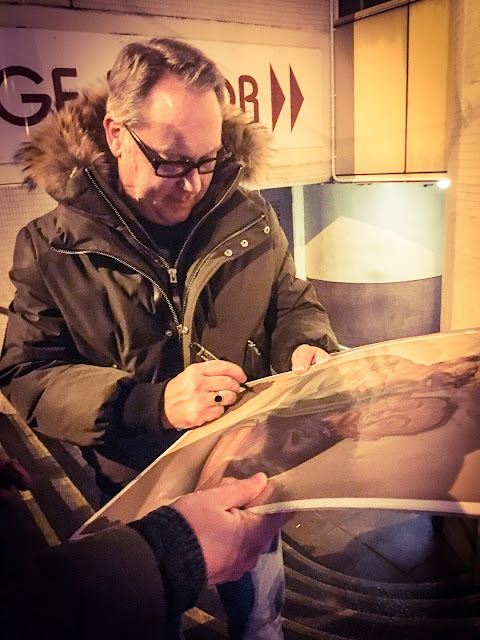 Jim seemed to like it
"It's great, well done, I look like me Dad. Must be that bulbous nose you've given us". 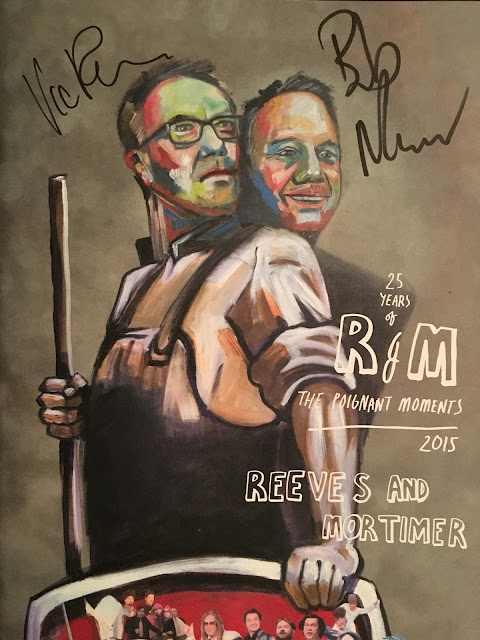 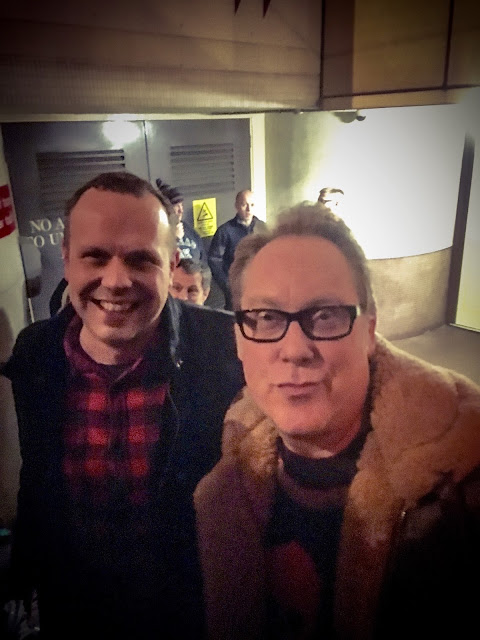 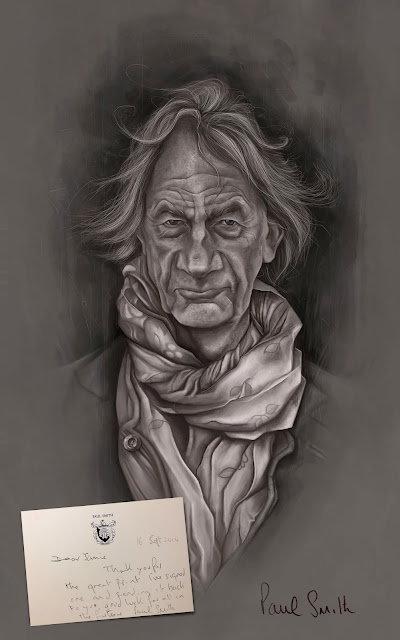 My portrait of fashion designer Sir Paul Smith, I was lucky enough to get this to his office, courtesy of an old friend. Paul was kind enough to sign it & write back
Posted by JR Gibson at 10:04 2 comments:

Peter Venkman from Ghostbusters, a great character from a terrific film. I had Jack Davis' work in mind when I did this (this is nothing like as good but I tried) Hope you like. Click for a larger view 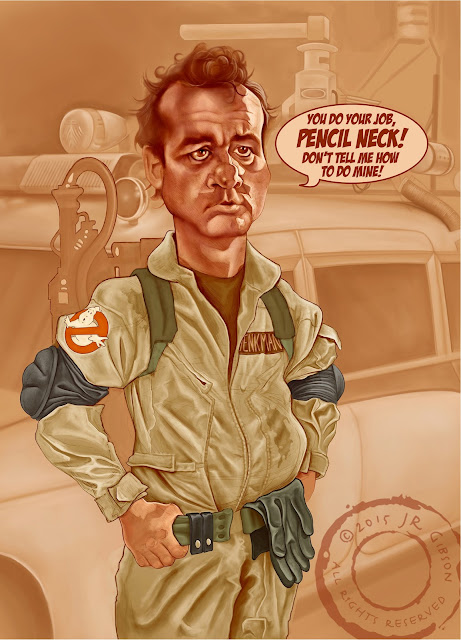 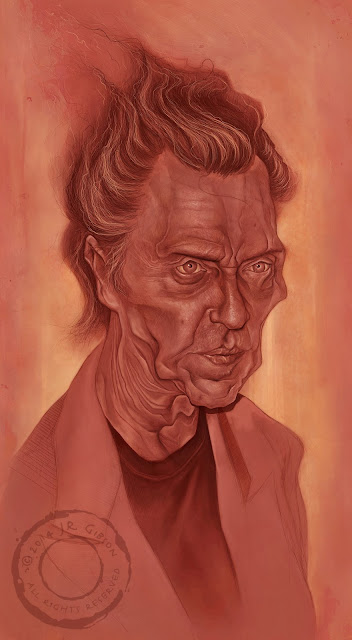 Now here's a face I've been meaning to paint for ages, I struggled to get a likeness at first but really pleased with it now. I had a lot of fun with the skin texture (see below) I could of gone on forever 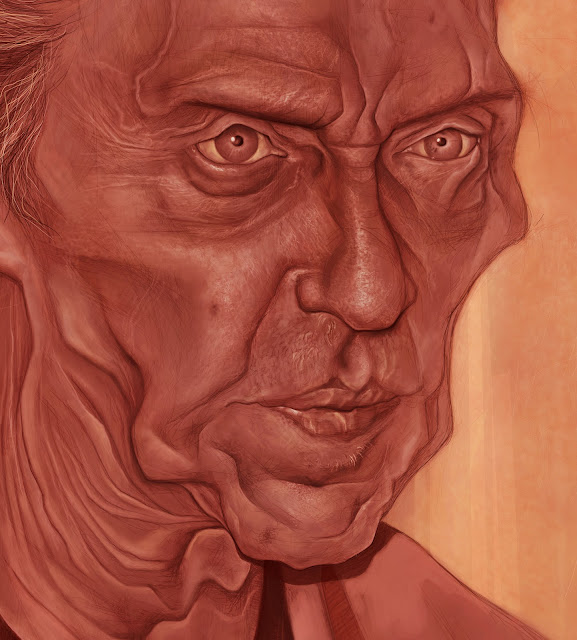 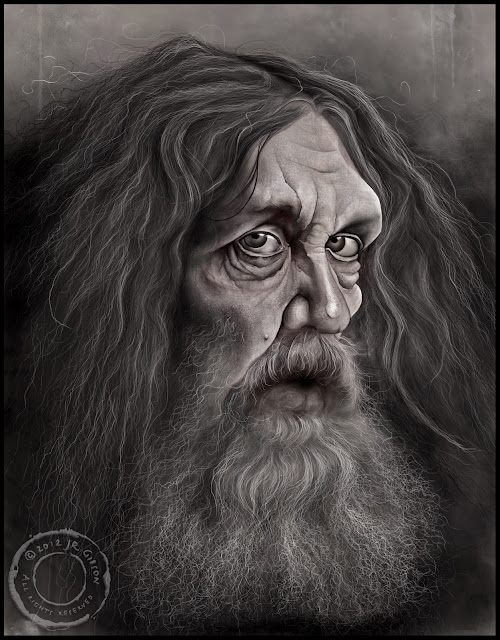 After mentioning I was keen to paint Alan Moore a friend mentioned that he would be good enough to get a copy over to him... Although I was initially stunned the opportunity was too good to pass up on. What a face to draw! If Alan was to see it I had to get this one right. I decided to keep this one a monotone affair to keep the look moody & menacing. 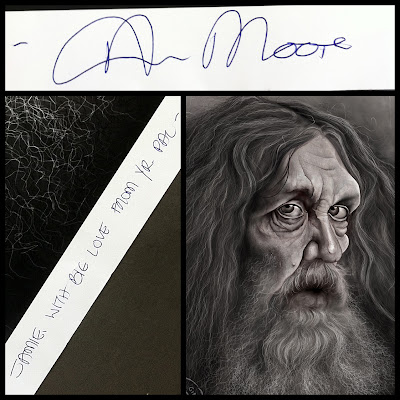 A couple of weeks passed before a signed copy arrived on the door mat, this I was not expecting (especially as I had been pre-warned "that Alan does not just sign anything"

Apparently he loved it. It now has pride of place in my front room and has become one of my most treasured possessions 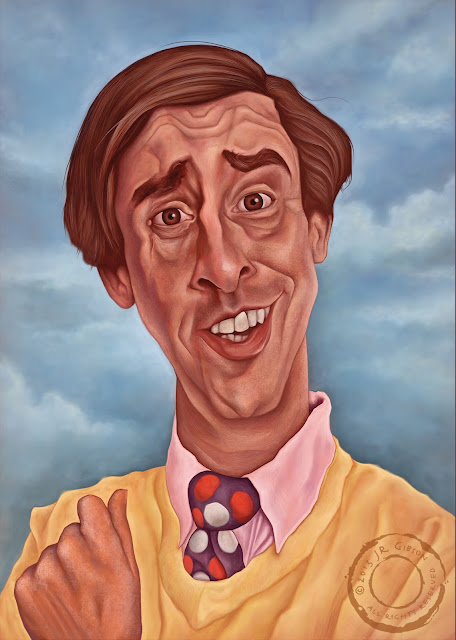 After seeing Mid Morning Matters I thought it was about time I painted Steve Coogan. I've been a fan  for many years (although previous sketches didn't have the right feel) as I wanted to the capture characters smugness, which resulted in a more 'cartoony' look than my usual style.
As usual comments are welcome 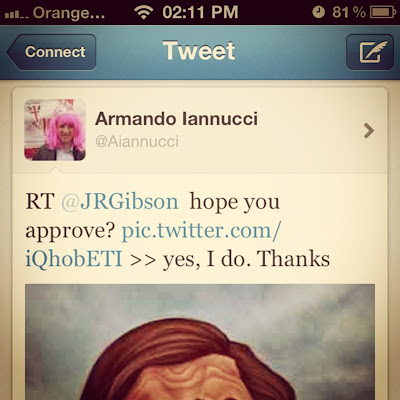 (I did also receive this from one of the shows creators Armando Ianucci)
Posted by JR Gibson at 04:33 1 comment: 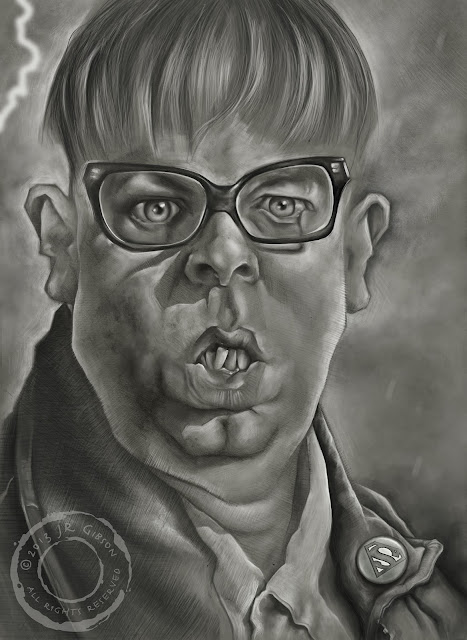 A new portrait, this time its serial strangler David Sowerbutts (played by Steve Pemberton) from the excellent Psychoville, which returns to your telly box later this year
Sowerbutts

(Oh, and heres a link to explain the badge) Superman!
Hope you like it, comments & feedback welcome!

Matt King also got in touch, you may recognise him from 'Bronson', although he is perhaps best known for playing Super Hans in Peep show. 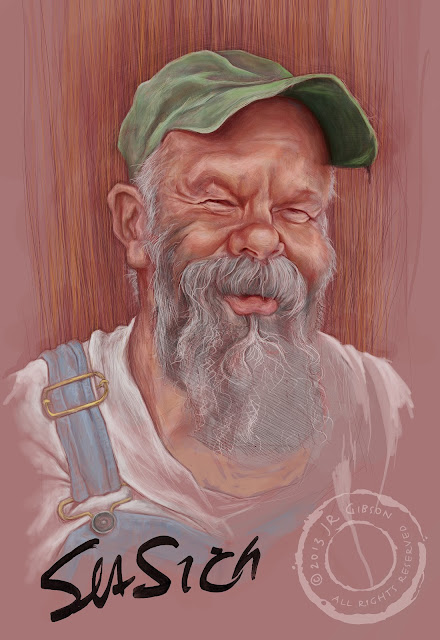 After re-visiting his albums recently and loving 'the three string trance blues' I couldn't help but want to sketch this guy. Still lots to do, but trying my best to keep it loose, hope you like.

Update: I should also mention that I managed to meet Steve at Glastonbury and show him my portrait & my Johnny Cast one too.

After deciding I was spending too long on recent pieces I thought it best to get back to some sketching, so I tried my best not to think too much and knock this up pretty quick.
Anyway, thoughts as always are welcome, click for a larger view... Hope you like it. 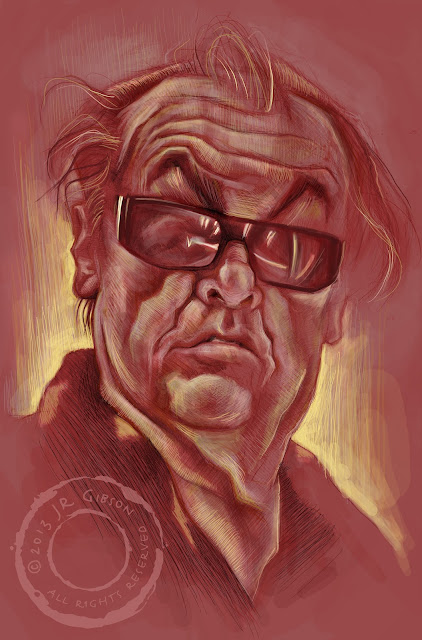 I was VERY pleased to see that Reece Shearsmith of The League Of Gentlemen & Psychoville approved of my efforts, as a result Psychoville may well be the subject of my next painting?

A big favourite of mine for many years are the Brixton collective Alabama 3.
Although best know for the Soprano's sound track they have an incredible back catalogue and are easily one of the best live bands in the country.

I decided to begin with the bands frontman Larry Love before starting on Rev D.Wayne Love
Thanks to Chris Sharpe for the cracking reference pic 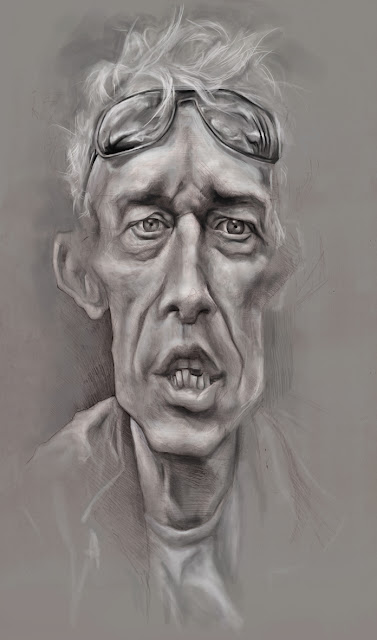 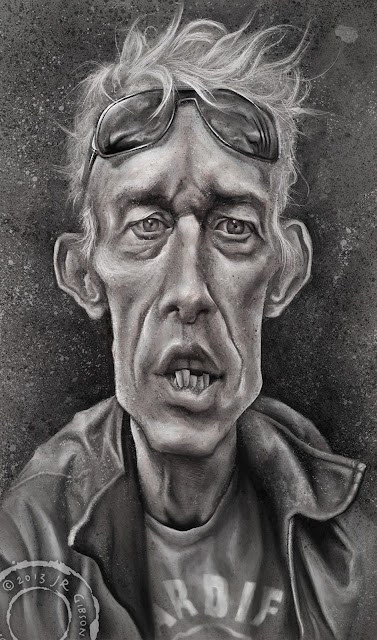 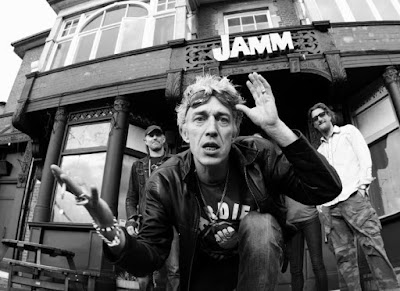 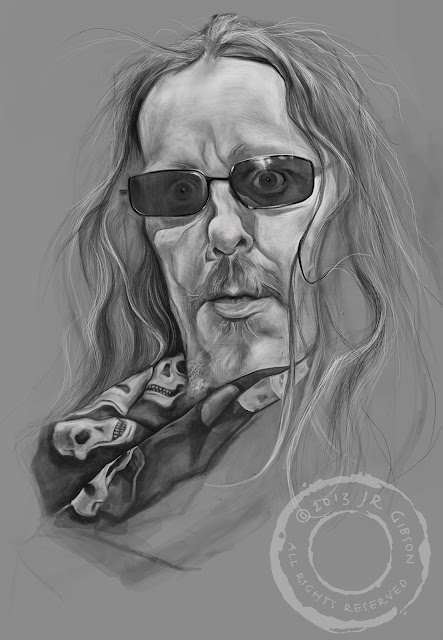 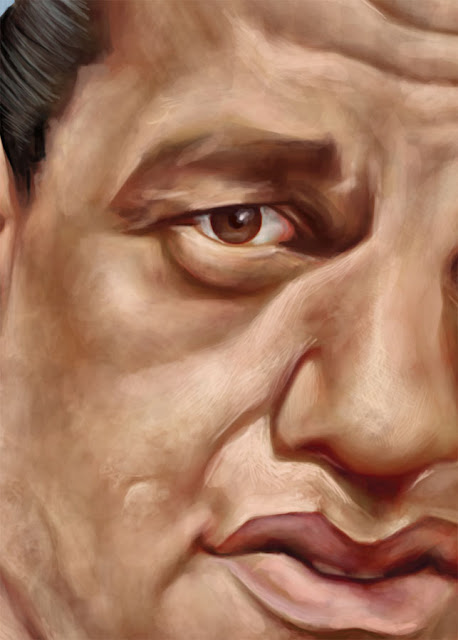 A work in progress snippet here of Chris Morris.
I've really taken my time with this one, mainly because I have been a fan of all his work for years and just wanted to do him justice. This has proved pretty difficult, Chris is incredibly illusive and notoriously camera shy, as a result sourcing reference pics has been the main bug bear of this project.

Consequently I have had to work from screen shots, along with some more recent shots of him,
also having to don a suit an pose for my own reference.
I decided to base the peice on the Drugs episode of the acclaimed series Brass Eye, in which
(for those who havn't seen it) Morris lampoons the media's take on drugs in society.
Above is a little tease of the work so far... although it should be finished very soon, all being well the next couple of days... 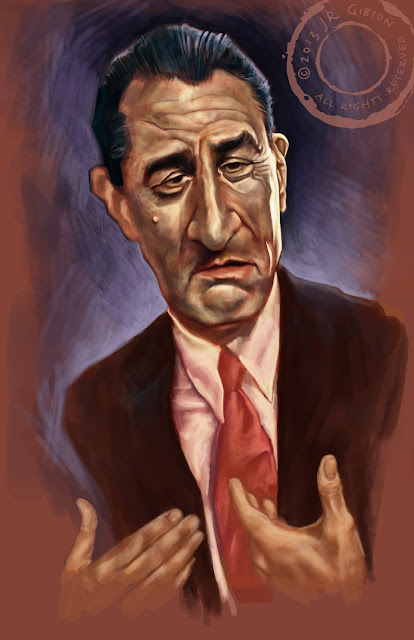 Tried something different with this one, did my best to keep it loose (which is difficult for me) Will revisit this at a later date, but in the mean time... 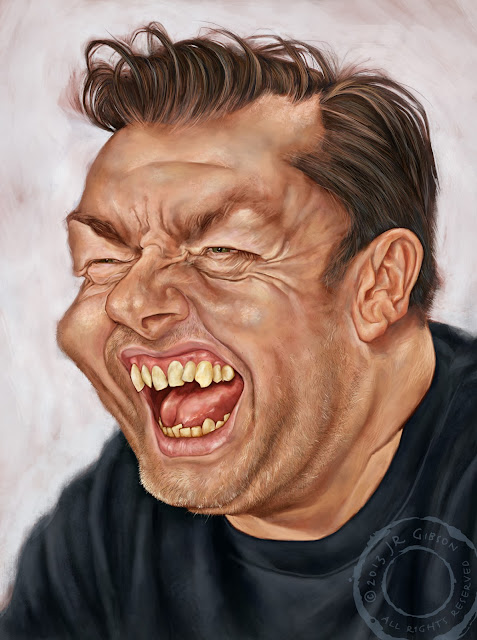 Been meaning to get round to do Ricky & his fangs for a while now. Tried hard to push the realism & detail in this, think its about finished (although, as usual I'll probably re visit it for further tweaks)
As usual thoughts are welcome. 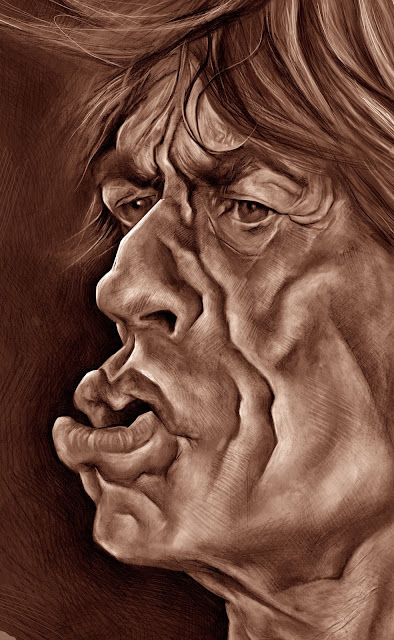 I finally managed to get this finished! 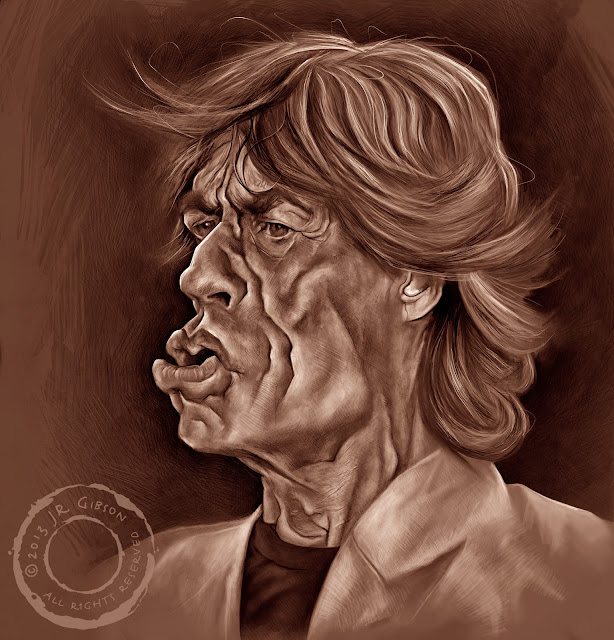 JR Gibson
Nottingham, United Kingdom
Hello there! Welcome to my site, do come in and have a look around but please take your shoes off. I'm a Nottingham based designer & graphic artist. Get in touch with any creative needs you may have. (Commissions are also taken)... This page will be updated regularly, so please pop by again. Cheers